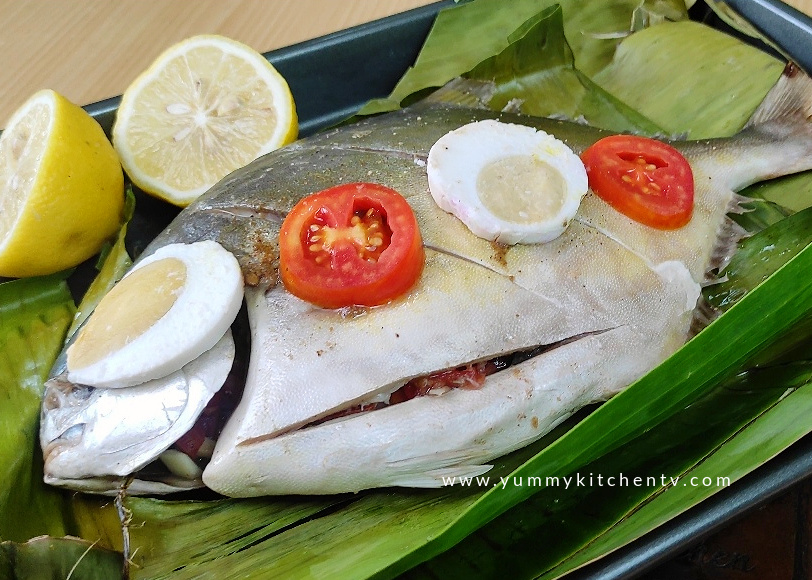 Baked fish has never been great when it is stuffed with all your favorite aromatics. Say goodbye to fried fish and try this baked pompano recipe! Your favorite pompano is not simply baked, but is also wrapped in banana leaves for extra aroma and flavor. Try this no-oil recipe today! Yum!

WHAT IS A POMPANO?

Pompano is a type of fish you usually see at the market. The gourmands, or people who eat often and kind of rate different foods, describes this fish as the “most edible fish”. That comment might be attributed to its large size, making it easier to consume than other fish. Pompano is a type of salt water fish but is now farmed for human consumption.

Just like any other fish, pompano is one of the favorite type of fishes for gourmet recipes. It can be cooked as fried, pinangat, steamed, baked in ginger sauce, grilled and even in sweet and sour sauce. This fish is very versatile and makes a good protein source to a lot of recipes.

Ever since the pandemic restriction lightens, I then return to trying different fast foods and restaurants for future reference. I think I had been eating non-stop fast foods and oily foods for the past week. I made a pledge to eat no-oil recipes for this week and the baked pompano is the first thing I had thought of.

Baked pompano is one of the best baked dishes for me. It is a hassle free dish since there are very minimal and simple steps needed. Since I am also the one to eat this, I gathered some banana leaves outside to make it extra special. One thing I learned in life is that when you will be cooking for yourself, serve yourself extra special!

If you wanna get rid of the oils and wanna make some baked pompano, read and follow the simple recipes below. Happy cooking!

HOW TO MAKE BAKED POMPANO IN BANANA LEAVES

Baking has never been easier with this baked pompano recipe. When all is done, simply let the oven do its magic.

Instead of simply putting the fish in the oven, of course we want it extra tasty. To do that , lets start by making the aromatic filling. Aromatic fillings are very useful for simple baked dishes like this one, more especially when you will be dealing with a fish. The usual aromatics used are tomatoes, red onions, ginger and garlic, which we will be using in this recipe. If you want to add more aromatic ingredients or use some herbs and spices, feel free to do so. Don’t forget to season this with some salt and pepper.

Get the freshest pompano fish from the market. These fish are of large variety and you can surely spot one right away. Prepare the pompano fish by cleaning and removing the guts and gills. You can skip this step if you ask the fish vendor to do this for you.

To make the fish cook faster and to absorb more of the flavors, make around 2 to 3 slits on its body on both sides. In this recipe, I rubbed sinigang mix powder aside from the usual salt and pepper to make the crust of the fish extra tastier. Stuff the fish using the aromatic filling prepared earlier until it is almost bursting. We do this so that the juice from the aromatics will surely be absorb by the pompano as it cooks.

Aside from preparing an the minced aromatic filling, we also need to prepare simply sliced aromatics, still the same aromatics for the filling.

Instead of placing the fish directly to the baking tray, we wrap our pompano first in banana leaves. The banana leaves also adds extra aroma to the fish when cooked. First, make a bed using the sliced aromatics. In this recipe, I added some sliced salted egg for a fancier look and of course, extra flavor.

Finally, wrap our fish in aluminum foil just to make sure that the fish will cook evenly. Bake the fish until its well cooked and easy to flake.

I like my baked pompano fish with a lot of hot steaming rice. Make sure to add some aromatic filling as you serve them to your plate. Yum!